Parallel jobs in GitLab with Pytest

On 22 November 2018, GitLab released version 11.5 which introduced a new attribute for the GitLab Runner called parallel.
This option allows you to split a single job into multiple jobs, and let them run in parallel.
I’m going to describe how you can use this feature to split up tests into multiple jobs with pytest.

The config option is quite simple, you define the number of parallel jobs to run using parallel: N in your job definition. The GitLab Runner docs have more details. Here’s an example from a snippet of my .gitlab-ci.yml file:

Standard pytest doesn’t support splitting tests between multiple jobs, but, fortunately for us, there is a plugin to do that.
pytest-test-groups allows you to split tests up into groups, by passing in a count, and the index of that run. After installing pytest-test-groups, we can tweak the .gitlab-ci.yml file like this:

Now, when we run the job, we should get output similar to this in the “pipeline” section of GitLab: 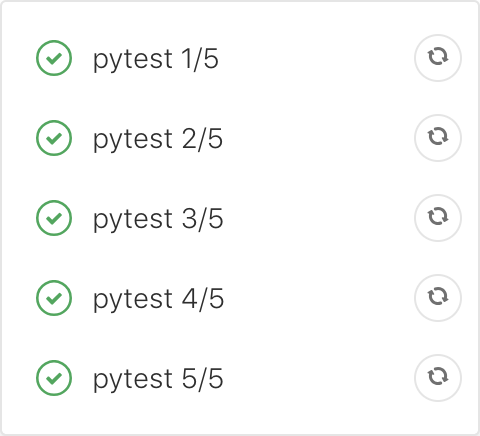 As you can see, this feature is quite simple to use and configure. Some things to note before considering it: